10 Judith Street In The News

Posted at 15:46h in In The News by Office Admin

Some things need to be fixed up before they fall down!

After our renovation, this property received a Carolopolis award by the Preservation Society of Charleston in 2012

“The two-and-a-half story stuccoed brick dwelling with a front facing Neoclassical piazza features corner quoining and a cross pediment with a well-detailed lunette window”   – ‘The Buildings of Charleston’; J.H. Poston, 1997

The John Robinson House in Mazyck Wraggborough. Original date of construction is 1814 the cook house 1814-1820. The original architect and contractor are unknown.

The preservation project was initiated in March 2010 (main house) and June 2011 (cook house) it was completed in Early fall 2012 and May 2012. The architect was Randolph Martz and the contractor was Mark Regalbuto. 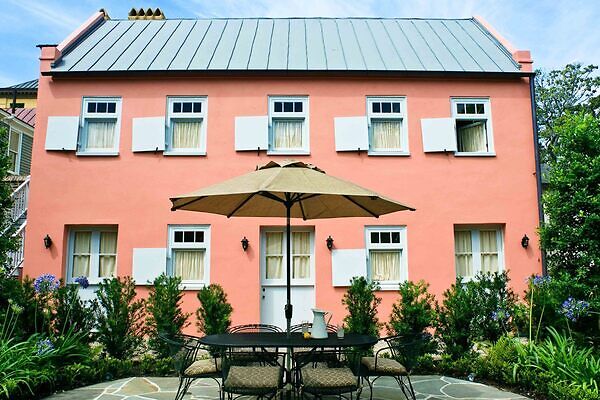 The owner applicant’s intent as stewards was to salvage a documented “demolition by neglect” project that was at or near the top of local preservationist essential to save list and to return this pristine, essentially unmodified building to its original condition. The eyesore was turned into a beautiful private residence. Important efforts worth noting: restoration of the two front porches, restoration of 28 original nine over nine windows, rebuilding and replacing of the; missing landing window and rear first floor doors with custom built Spanish cedar historic exemplars; expensive repairs to the main house roof and total replacement of the cook house roof and infrastructure.

Extensive repairs to the main house walls and rustification of sections thereof consistent with the original design;  almost total restoration of the cook house, including custom built windows, shutters and doors replicating those in the original building; landscaping the front and back in a way that gives the John Robinson house a walled estate feel consistent with its federal ancestry. 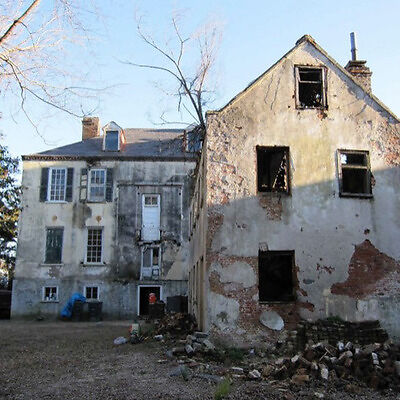 Foundation and Site: a section of a rotted, dangerous, unstable hyphen connecting the main house to the cookhouse was removed for a safety and liability purposes. At one time it was linked to some kind of non original rear porch that was removed prior to the applicants ownership. At the suggestion of Glen Gardner, our landscape architect, a number of small and medium weed trees were removed. No other existing historic structure was removed.

Stacks of old brick found in the yard and in leveling the property were either used in the cookhouse floor at the bottom level, the external walkaways, or are stored in the main house basement. Our predecessor owner had done significant excavating of the property’s open spaces looking for salable artifacts. We found only two items- one intact 19th century Germany crockery beer bottle and an early 19th century penny.

Cook House: The cookhouse was unstable, dangerous shell when restoration started. The roof was gone and the infrastructure rotted and dangerous. The atchy and cracked stucco was removed. The dutch brick underlay was cleaned and tuck pointed. The entire exterior was then restuccoed in accordance with the cookhouse’s original historic appearance.

Structure: Other than porches, cornice and stucco restoration discussed elsewhere, the main house remained structurally in good shape. No additions were made to the main house other than the rear entrance/ exit.

The foundation was dug out and reinforced below ground with steel bars and a concrete foundation was poured after piping and conduit were set in place for the mechanicals plumbing, electric, AC and heating.

A second floor door way already existed in the cookhouse. With BAR approval we added an external wooden stairwell with a period look connecting to a brick platform and then to the brick walkway connecting the cookhouse and main house. This was the only efficient way to utilize the second floor and is not visible from the street in any direction.

Porches and Piazzas: when the property was purchased, the two porches were in extremely poor repair, structurally unsound to stand on, badly rotted, supported by railroad ties, and in danger of separating from the house and listing toward the street. The porches were taken down and rebuilt. Almost all the columns were salvaged in full or in part.

The balustrades and rails were not salvageable. Identical replicas were custom made and installed. The two porches were constructed with a proper drainage tilt and a hidden underneath drainage system, repainted, and affixed to the front of the house in accordance with the recommendations of our structural engineer.

Windows and Doors: Vinyl panels inserted I  the third floor dormer windows by a prior owner were removed and replaced with custom built, Spanish cedar six over six historically appropriate sash windows. The front hall landing window to the second floor had been transformed into a door way into an add on bathroom on stilts at some point in the 20th century.

When we purchased the property, the add on had been removed. We rebuilt the window and had a custom built, Spanish Cedar, historically appropriate nine over nine sash window installed, replicating the rest of the main house first and second floor windows.

There were no existing doors at the back of the house that allowed access to the ground at the English basement level. Sections of wood and plasti kept the elements out. Randolph Martz designed Spanish Cedar double doors appropriate to the period and a wooden double stairwell to the ground along the back wall of the English basement. The stairwell design is based on that of the William Paca House (1763-65) in colonial Annapolis. 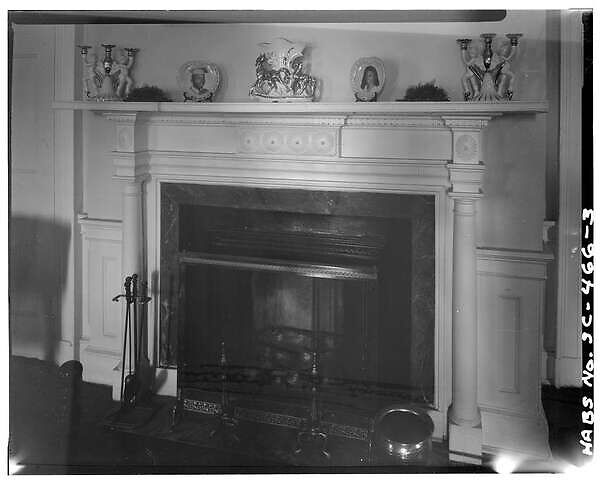 The original twenty eight nine over nine sash windows on the first and second floors were removed, sanded, glazed where necessary, painted and then reinstalled with a hidden copper seam to help insulate the windows and repel moisture. The lunette or fan window in the inverted V of the third floor front was removed and sympathetically restored by David Dick, then reinstalled within newly operating ropes and pulleys so that it can be raised into the wall- an original air conditioning feature.

Cookhouse: Luckily, one original window was largely intact. Using that and the ones in the original john Robinson outbuildings at the Aiken Rhett house as prototypes, we had custom built wood windows made to the original design-three fixed small panes over one large pane.

A rotted section of one half door remained in the shell at the time of purchase. Following architect William bates’ recommendation and replicating what was at the Aiken Rhett House we had three custom built, one piece dutch doors made with glass panes at the top and wood at the bottom. The one piece design was used to keep out the elements and for security purposes.

The same design was used for the second floor entrance at the top of the external stairwell approved by BAR. Note that an existing doorway was used which had some point had been linked to the hyphen and an exterior porch to the first floor rear level of the main house. 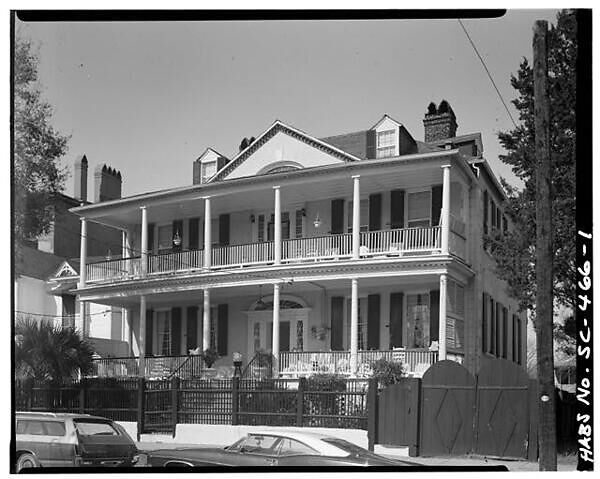 Main house: There were operable historic shutters on the front porches of the main house, which had been protected from the elements by the porches. These were removed, scraped repainted in Charleston green and reinstalled. Several other non-operable and partial shutters were removed and are stored in the basement with others original to the house. Over time the owners plan to restore and reinstall them a side at a time.

Cookhouse: Luckily. We had the Aiken Rhett house as a prototype. Large one piece wood shutters were custom built and installed with shutter dogs.

Cookhouse: as mentioned elsewhere, the patchy and cracked stucco was removed, the dutch brick was cleaned and tuck pointed, and the entire exterior (including chimneys) restuccoed. The stucco was then painted a coral color approved by the BAR.

Where appropriate, the new patches were scored or rusticated to blend in with the aged look of the always stuccoed main house building. With BAR approval, the stucco was painted in Low Country spoon bread from the Sherwin Williams historic Charleston color chart- this was a slight variation from the duller yellow that preexisted. No research was done to see what the original color may have been.

Main house: No Chimneys were removed. The brick chimneys were partially rebuilt where unstable, then tuck pointed. The bishops’ hats were beautifully restored.

Cookhouse: Same as above but the bishop’s hats were restuccoed after tuck pointing and left unpainted as in the original design.

Main House: the slate roof was in fair shape, with numerous undisclosed slow leaks, particularly around the lower section of roof just above the cornice. Hidden metal was inserted under the lower two feet to eliminate the leaks-successfully.

Cookhouse: The roof was entirely gone except for a few precarious and dangerous bits of timber infrastructure. None of the timber was reusable for roofing purposes. The roof was totally rebuilt with a painted metal roof at the original height. Some bits of wood were salvageable and made into furniture by capers cauthen a large country style table for the main house kitchen and two smaller tables for the cookhouse.

Landscaping: Two stately palms were added to the existing two in the front, continuing the line of palmettos from the aiken Rhett house at the corner. Bushes and grass were also added, along with ground cover along the curb. In the rear the wall was raised on the left side and a new 11’ once installed at the rear, capped with brick, and stuccoed. Foundation heron fountain to a live oak in front of the rear wall.

Twin magnolias anchor the rear corners. Connected to the walkway is separate “room” dvided by a podocarpus hedge an inlaid slate patio surrounded by bushes, holly trees and plants. A row of four palmettos helps divide the patio and grassed in area from the drive along the side of the house.

Main House:  Discreet period style back hanging lamps were used in the front at both levels and in parallel wall fixtures affixed to the sides of the double doors at the rear. No gas lamps or lanterns were used. 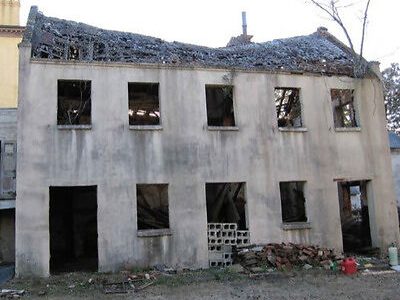 Cookhouse: Four small period style black lamps were affixed to the first story front of the cookhouse. One was also installed at the top of the stairwell to the upper unit on the stairwell post. Very modest and subdued lighting at ground level was installed to illuminate the walled garden parking area, walkways and patio. The lighting is hardly visible from the adjourning properties and is the minimum necessary for safety and liability purposes.

Other: It should be noted that the applicants have taken very detailed and expensive steps to also ensure that the internal fabric of the house is preserved for future generations.