‘This Old House’ Films In Charleston For The First Time

Contractor Mark Regalbuto is trying to show homeowner Scott Edwards how he wants to handle two details with his historic downtown Charleston renovation, but it’s taking a while. 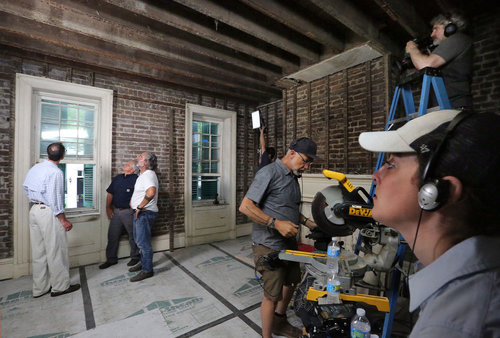 That’s because there’s a full television crew, not to mention a second contractor, Tom Silva, in the picture.

Yes, as the Emmy award-winning PBS show “This Old House” begins filming its 39th season, it’s finally arrived in Charleston, a city known for its many old houses.

Show host Kevin O’Connor visited Charleston last year to speak to a trade group but also to scope out possible houses for the long-running show on home renovations. He didn’t visit Edwards’ property then, but he certainly sent the message back to show producers that there is a lot going on here.

Then they began looking for a new project, a historic home of their own downtown, and eventually bought a 19th-century single house in Ansonborough that has seen little if any renovation as of late. The brick house doesn’t even have central heating or air, and no one has used the kitchen building in back for years.

Meanwhile, Edwards signed up online to be considered as a “This Old House” project here.

“I’ve been watching ‘This Old House’ since it started. Every season,” he says. “I thought, ‘Well, what the heck?'”

He didn’t hear anything for a few months, as he and his wife began planning their renovation with architect Bill Huey and Renew Urban contractors Regalbuto and Andy Meihaus.

Being chosen as a “This Old House” house requires a bit of luck, with the show and owner both deciding that the house, planned renovation, local contracting team, and timeline all make for a good fit. In this case, it was.

O’Connor says he’s excited not only to be filming a house in Charleston but also such a classic single house: one room wide, side piazza, main entrance onto a stair hall off the piazza, and a small kitchen house in back.

“The cherry on the ice cream was that it was in really bad shape,” he says. “It has kind of just been frozen in time.”

Filming began May 1 for a few days and resumed this week. The production crew expects to return every few weeks until the end of the year to film further updates. 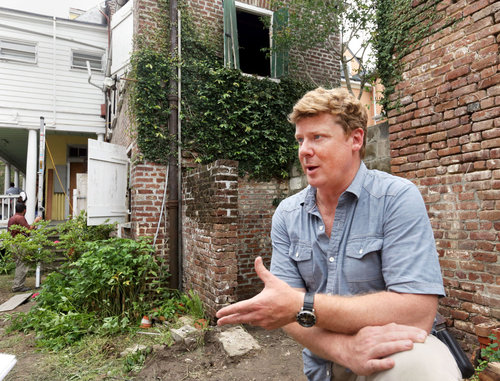 Kevin O’Connor, host of “This Old House,” talks about the filming of the show’s first renovation in Charleston. Brad Nettles/Staff. Brad Nettles bnettles@postandcourier.com

The work includes a full renovation with new wiring, plumbing and landscaping. The work will open the rear wall to allow inside access to both the upper and lower floors of the kitchen house, which will serve as a dining room below and new bedroom above.

As with many Charleston renovations, O’Connor says one of their biggest challenges will be how to weave new ducts and returns for an HVAC system as inconspicuously as possible.

“We are at demolition. We’re peeling it apart,” he says. “The homeowners are making decisions about how to put it back together.”

And that led to last week’s taped conversation between Edwards and Regalbuto and Silva in the first-floor room closest to Hasell Street.

The Edwards removed the failing plaster and plan to restore the interior so the bricks show. But that still leaves the issue of what to put between the ceiling joists to block dust and provide a little insulation — and how to handle the gap between the window moldings and the newly exposed old brick.

Regalbuto and Silva show Edwards how they propose handling these things, and he basically says, OK, great. At least three or four times, as the director and crew seek additional footage and takes.

So the novelty of filming while fixing is slowly sinking in.

“Candidly, I was a bit reticent ahead of time,” Regalbuto says, “but after talking with everybody with ‘This Old House,’ it was really clear that they were there to observe and be supportive. They didn’t want to manufacture drama. They wanted everything to be legit, and that’s true. It’s been terrific really.” 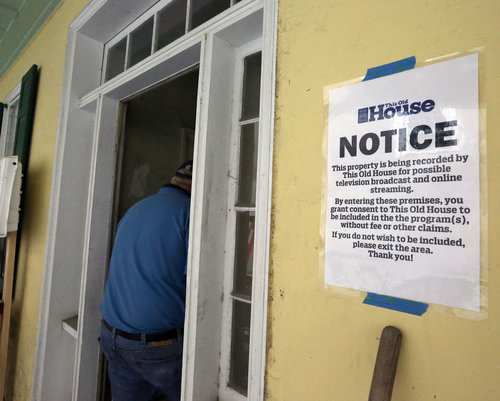 “This Old House” crews are filming the renovation by dropping by for new segments about every three weeks. Brad Nettles/Staff.   Brad Nettles bnettles@postandcourier.com

Edwards acknowledges that filming 10 episodes adds another layer of complication to what can be an already stressful ordeal, but there’s also a clear upside about having your home renovation subject to the “This Old House” treatment.

The show’s production calls for filming to be done by December.

“This pushes them to stay on schedule,” he says.